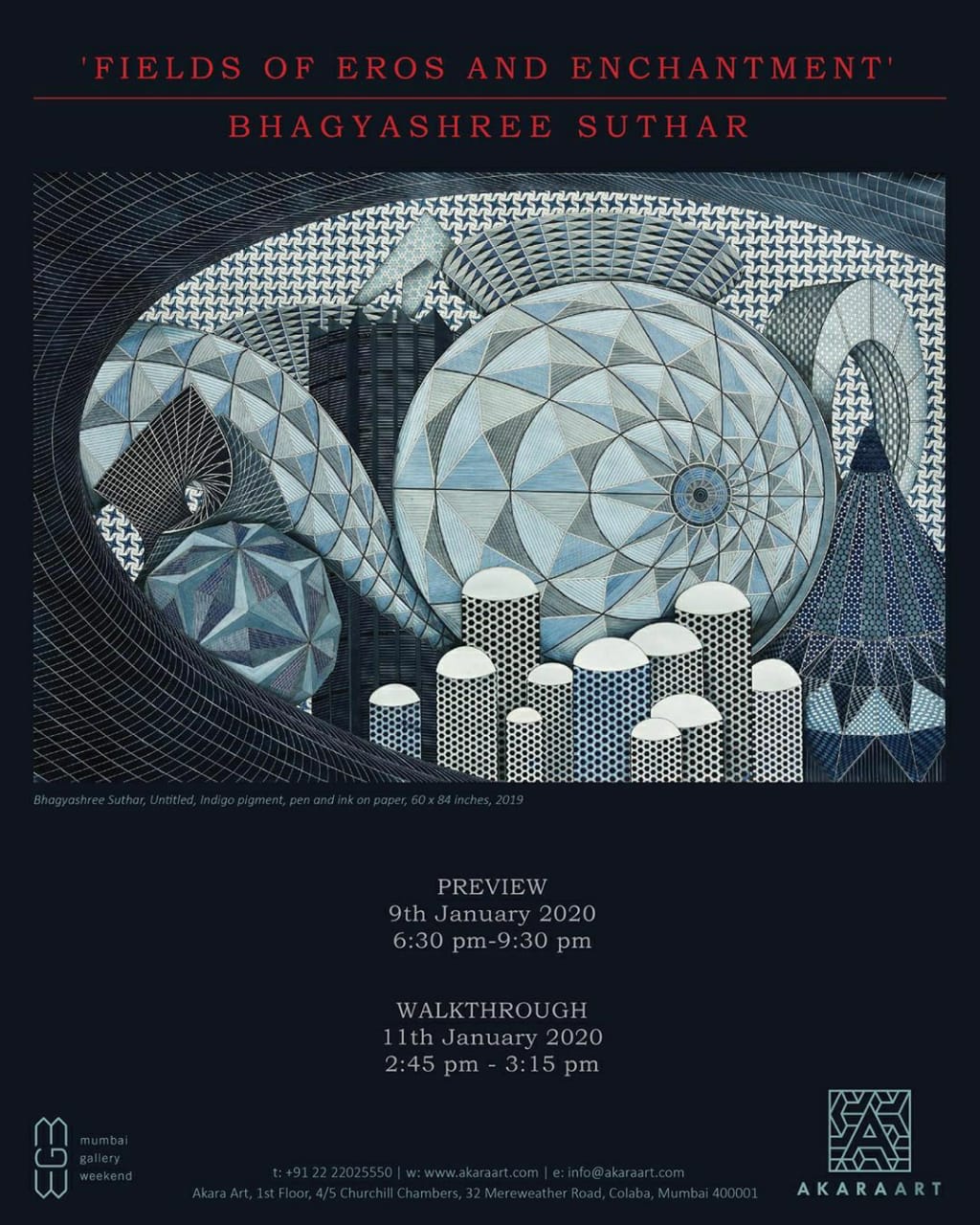 Fields of Eros and Enchantment by Bhagyashree Suthar

Meticulous lines weave into each other, one after another, some thick, some thin, some turning into bands building up a high-rise-like construction, some meeting at angles to shape some hedronic formations twirling into a sphere, others whirling into tornado-like swirls, while twisting star-like patterns covers the ground beneath. These images draw into your eyes probably much in the same way Bhagyashree Suthar, the Baroda-based artist draws lines on surfaces – thoughtful and indulgent, involved and generous in turns. Upturned Ziggurats in spiral formations, feathers clustering and opening like the ballerina’s dress, and the sphere is cut open to show the geometric construction of the mathematician’s imagination of a Platonic solid. Nuts and shells, spheroid and butterflies, the fly-whisk, petals in perfect mathematical structure, honeycomb plate, fabric, paper, and solids sedimented – all inside and shaping the landscapes of these fantasy worlds that Suthar draws out. The large works are literally sets for a science-fiction tale or a fairy tale with Alice and the Mad Hatter, or stage-assemblages for Hrithik Roshan to dance across or Sridevi of Mr India or a another James Bond or Inception sequence.

Are these landscape of the future? Of times-yet-to-come where technological progress will give us perfection, and science will make our lives risk-free – where all will be pure nature, and pure technology, with the long division of history between the two vanished such that technology is nature, and we read nature as the birth of technology. We search for the shape of future desperately – we imagine it in our most desired objects; we make perfect fantasies to fit our lust for futures in it. Utopia is one such future, it is perfect, it is so perfect, it does not exist, and it will never exist, it is truly ‘no place’ – but we strive yet to grab, create, imagine, build that future – the place of perfect abode – the place of perfect dreams. Our world is so chaotic, filled with emotions, we believe rationality to be that future; and we think geometry will give us the predictability of futures, and crystallise dreams into shards of tectonic structures – geometric yet forest-like, rational yet complex as urban natures that we are.

Bend, mould, twist, stretch geometry – is what Bhagyashree Suthar does in her drawings and paintings. Here geometry is robust and juicy, and every story in geometry shapes itself into landscapes of time, light, and intrigue. As the lines and spaces in her geometric forests, along-with the shades in-between, hide and emerge by turns, they play out a field of memories and histories of imaginary worlds we call Utopia. Suthar brings into her work a whole history of humankind’s interest in shaping worlds of perfection – places of balance and cosmic as well as earthly magnificence and sublimity – utopia – something that never exists, a never-place!

Geometry for the human being is precise – and as soon as this precision is discovered in some version in nature, nature and its myriad avatars are projections for a complex future – where we look for composite networks of life in perfect poise and balance, as well as equal-ness of exchange with all the magic of regeneration, reproduction, predictability along with the wonderment of tectonic materiality and their structural expressions. The lure of geometry is in some sense erotic, it draws you into a world you bodily revel in, with the visual excitement of lines and forms crossing boundaries and getting entangled into new maps and objects – objects becoming landscapes of forms, form after newer form, a proliferation of corners and edges on the drawing, and suddenly a new garden of vexed configurations shapes a new world of crystalline objects and landscapes. Every drawing of Suthar is a new world of crystal avatars, making new gardens of Eden for future adventures.

From drawing out interior worlds of monumental architectures and crystal structures, she journeys through lessons in fractal geometry, Renaissance models of balance and perfections, as well as parametric designs challenging human control over shape and form. These worlds she paints are mirrors now of our interiority and hidden structures beneath the world we tread everyday. In Suthar’s works all models of perfection and utopia actually now reflect the most real and unedited lives and imaginations we live – they pull out from under our skin our real selves struggling and entangled between eros and enchantment!

“Radek paused, collecting his energies with an effort. ‘Tatlin believes that this Hubble Effect, as they call it, is… … … … — an actual proliferation of the sub-atomic identity of all matter. It’s as if a sequence of displaced but identical images of the same object were being produced by refraction through a prism, but with the element of time replacing the role of light.’”
(From The Crystal World by J G Ballard)

Suthar’s drawn-worlds are choreographies and organised collections of energies. There is the sheer energy collected and transferred from the drawing body to the drawn image itself; and there is an engagement of the seeing-body, viewing the work in all its intensities, and energy collected by the viewer. Visual forms in exchange of energies and meanings. The meanings of these images draw out and on from a rich tradition of architects, writers, and artists, as well as explorers who have invested in the idea of imagining up a future – a world yet to come. Architecture’s ability to draw fantasies out of existing realities, delving into the secret structures of nature and forms of life on earth and combining those with the feats and wonders of technology, has been a persistent mode of constructing visually what our caves and cities of the future may look like. Suthar having invested her post-graduation thesis to this subject, is familiar not only with the histories and contexts of drawing up futures, but also invested in the use of geometry and mathematical constructions and abstractions towards mapping these languages of the future world. From the Fibonacci series and Fractals, Parametricism and Visionary Futures of Archigram to the drawings and models of Lebbeus Woods or the architectures of Zaha Hadid and Frank Gerry – they all build a library and long history of this investigation for Suthar. While at the same time Suthar collects images and objects from everyday occurrences such as the garden or the kitchen to draw out futuristic patterns from the details of existing everyday lives. In meaning as well as in process Suthar’s works bring the fantasies and aspirations of future right into our present realities of complex negotiations with the adventures and transference of life as it exists right now.

Her early works often remind you of the intriguing postmodern challenges to the ideas of Time and Space; where Time was sculpting the tectonics of space. Having then moved on from these interior-architecture sculptural scenarios to the landscapes of objects and geometries, her most recent explorations move to the three-dimensional surface and the miniature-portrait of talismanic objects. Suthar in beginning to work with the three-dimensional, moving from drawing to making sculptural objects of the same scenarios she was drawing and painting, she does not hop on to the easy and classical architect’s trick of extruding drawn forms into three-dimensional geographies and surfaces. Rather, she literally introduces near-earthquake-like tectonic shifts in the calm two-dimensional surface she draws and paints on; and them as if the drawing is now a post-tectonic-shift reality. What was in the third dimension in her large landscape drawings, now becomes a two-dimensional landscape of lines, plates, colours, as the two-dimensional base is provoked into a sculptural recognition of its own new potential. These sculptural works are much more objects in the round, as much as they may appear only two-dimensional projections. As if a persistent anarchy makes the future more beautiful – a kind of ‘terrible beauty’ once again a mirror to our present – one of deep tremors of instability in secret dalliance with our aspirations for a dynamic future – utopia as ‘entangled present meets power-existences of the future’.

And then her most recent works, are a collection of small portraits – portraits of objects, done much in the style of the Mughal natural history miniatures, where each bird or plant occupies a centre-frame and is drawn in all biological and emotional detail most objectively. Suthar is now as if drawing the organisms of the worlds beyond the Utopias in her works; these are precise geometrically bounded forms, opening up into inner-worlds of geometric explorations and patterns from visual inheritances – much like the biology diagram of a seed or bud bursting open to explain the workings of nature and science in the world of some God and human beings. These micro-organisms are bursting with life – visual life and rich histories of drawn lines in many formations of patterns, hedrons, series, and so on. These at times appear as if drawings from a previous-life to the larger landscape works, however, one soon realises how these works are actually the crystallisation of landscape explorations into these new object-diagrams, short-stories, portrait paintings. As if these works are now the creator’s lexicon and encyclopaedia of life-forms and object-lives that go into making the expansive utopia worlds Suthar has so loving created with persistence of drawing and the love for visual situations.

Suthar’s crystal worlds of great depth and visual intrigue on the canvas are repetition and reflection of our existing worlds – the worlds we occupy and live in, and the secret gardens of fantasy and hope we hide preciously beneath our skins. It is the textures and geologies of the skins we hide under that Suthar’s artistic scanner exposes, magnifies, super-magnifies to reveal the worlds of eros and enchantment we harbour, we hide inside, and we also unashamedly flaunt at times – the complex lives of us.

Subscribe your email address to receive notifications of new evetns by email.