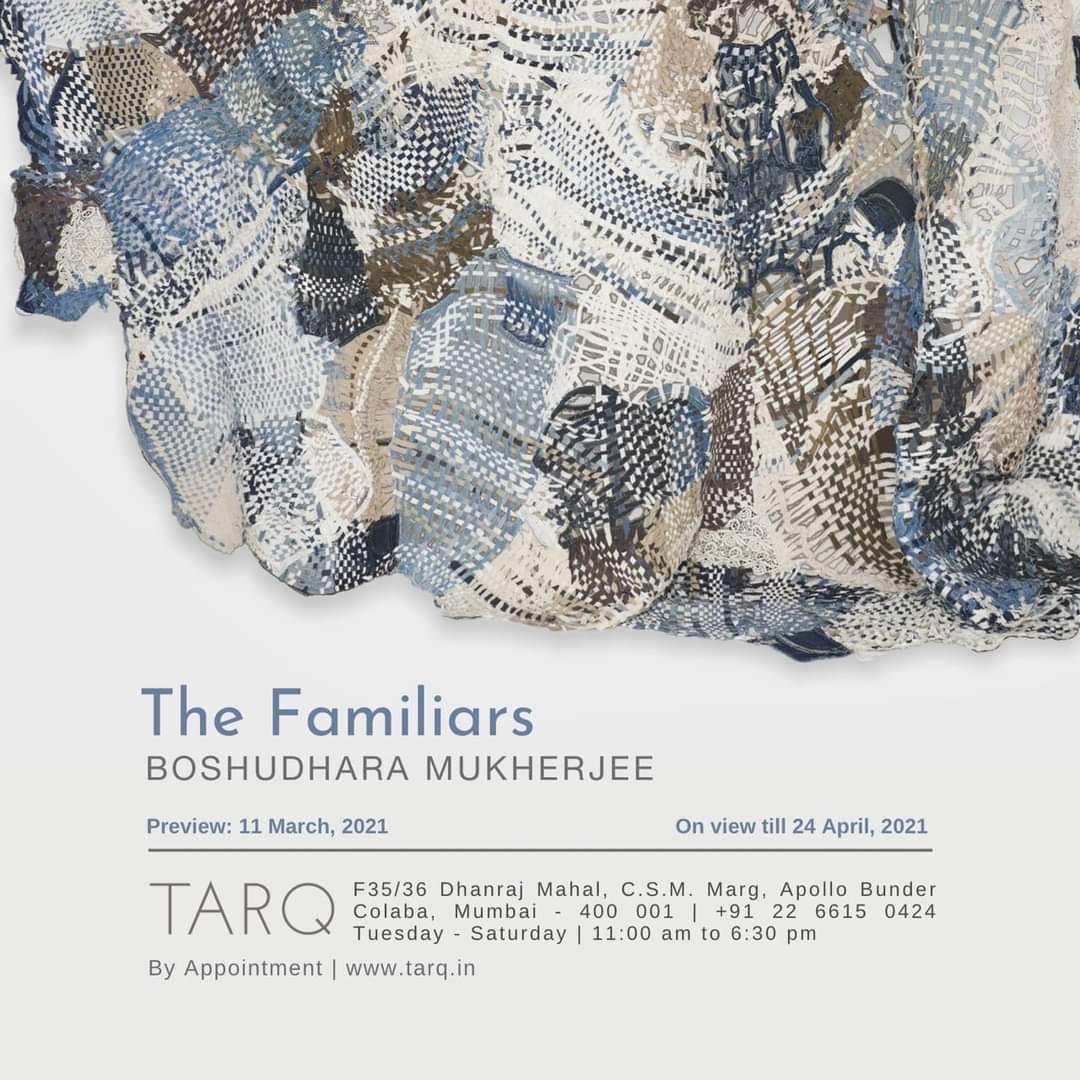 The Familiars by Boshudhara Mukherjee

TARQ is set to open artist Boshudhara Mukherjee’s exhibition titled ‘The Familiars’ on 11 March, 2021. The exhibition presents eight recent works by the artist in her distinctive style of large-scale, tapestry-like installations of woven canvases. The title for this show is inspired by the Wicca legend of ‘spirit guides’ called ‘Familiars’ who are believed to take the form of an animal or human to guide individuals. The ‘Familiars’ are a source of strength and wisdom; they are guardians and protectors.

The artworks in this exhibition present the artist’s introspection of her sense of drawing closer to the lives around her, drawing sustenance and inspiration from them to conjure new beings in the form of her woven canvases. For instance, she draws inspiration from her cats whose movements take on a metaphorical significance, much like they did for the French poet Charles Baudelaire, whose poem Le Chat, the artist quotes as inspiration.

For the suite of works presented in this show, Boshudhara continues her practices of shredding painted canvases or revisiting old canvases only to dismantle them, re-purposing these to create new entities that take on an entirely original form. A celebration of the dichotomy of continuity and rupture is a strong theme in Boshudhara’s practice.

As her distinctive technique, Boshudhara weaves in found objects – some of sentimental significance, others entirely coincidental – into her canvases that resemble tapestries or fragments of carefully mended textile. Much like a committed master weaver, Boshudhara attributes a deeply meditative experience to her process where the rhythm of her hands takes over any self-conscious gesture, until there is a oneness between the artist and her artwork that grows and appears to respond to the artist’s touch.

Talking about the ideas being explored in this exhibition, Boshudhara says – “ The spirits of the Familiars have their own physical existence, yet they are a spiritual extension of the individual they are destined to guard or move with. My artworks are an alter-ego I have conjured and yet I see these self-determining, organically growing entities, following their own predestined path.”

Boshudhara Mukherjee (b.1983) studied painting at the Maharaja Sayajirao University in Baroda and has been exhibiting actively since her graduation in 2008. She received the Pollock-Krasner Foundation Grant in 2013, the Inlaks Foundation Fine art award in 2010 as well as the Nasreen Mohammadi Foundation Scholarship in 2005-06.

She lives and works in Bengaluru.

Subscribe your email address to receive notifications of new evetns by email.